ZW3D is a well-known CAD/CAM solution for mold and die industry, and in the field of CAM (computer-aided manufacturing) ZW3D supplies a powerful processing module, QuickMill.

QuickMill provides several ways to apply its roughing functions, and we describe these here. Through detailed parameter control, users easily make optimal tool paths. Here is an overview of the roughing strategies provided by QuickMill in ZW3D.

To remove the excess materials quickly, we use a large diameter tool with a parallel tool path to machine work pieces that have large rough machining allowances. See figure 1 for the type of rough lace tool path generated by QuickMill. 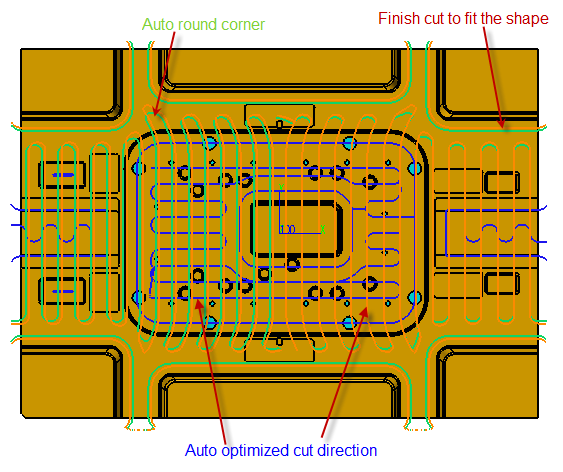 1) Auto Rounded Corners. During parallel cutting, higher cutting speeds and lower depths are permitted, and so machines can be damaged when the cutting direction changes suddenly when the tool runs into corners. The sudden turn of the x or y axis can generate a tremendous impact on the spindle and guideways of the machine, and so may damage it. Over time, the precision of the machine drops off, accompanied by an increased failure rate. See figure 2. 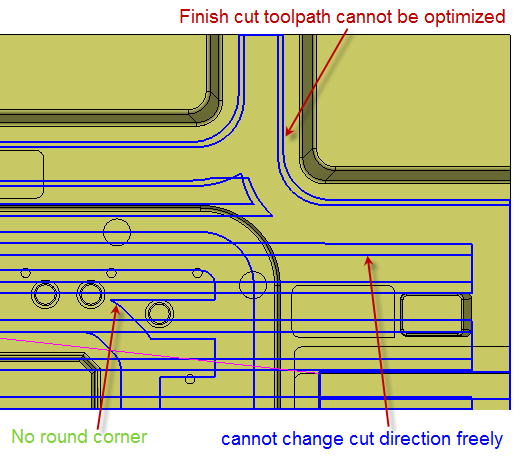 2) Auto Optimized Cut Directions. In parallel rough machining, it is common for other CAM software programs to set the cut direction manually, with all tool paths going along the given direction, even in areas where these tactics are considered inappropriate.

With its auto analysis system, QuickMill adjusts the cutting direction in different areas on its own. In this way, CAM programmers liberate themselves from spending unnecessary time in setting other kinds of procedures and different cutting directions to match the processing demands.

3) Finish Cuts.CAM programs other than ZW3D use two methods to deal with the finish cut. One method is to process the parallel tool paths first, then to process the finish cut at the same level; the alternative method processes all level parallel tool paths first, ending off with the finish cut. Both methods have their weaknesses, especially when dealing with open contours; the methods make too many air cuts along tool paths. These useless air cuts reduce machining efficiency, and make the machining process discontinuous.

With its intelligent kernel, QuickMill combines the two methods, and so reduces the number of air cuts, thereby improving machining efficiency

Spiral cutting is the primary method used to process work pieces with complicated surfaces. It avoids many rapid movements, and does not engage dangerous tool paths in narrow areas otherwise caused by parallel cutting methods. The spiral cutting method is widely used in molds, dies, and so on. 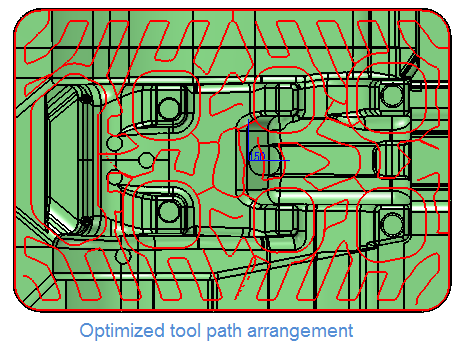 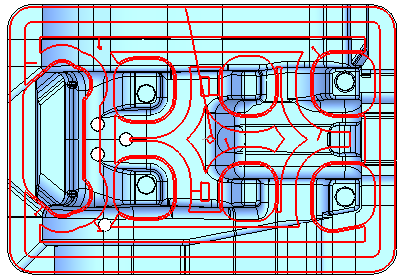 By comparing figure 3 with figure 4, you can see the QuickMill tool path is continuous, while the path generated by other CAM systems suffers from being discontinuous.

Nowadays, machine and cutting tools have an excellent performance, and so the demand for HSM (high speed machining) is high. ZW3D has been cooperating for many years with machine manufactures, thereby accumulating a lot of experience in HSM. QuickMill’s rough smoothflow function effortlessly meets the needs of HSM during the actual production process. 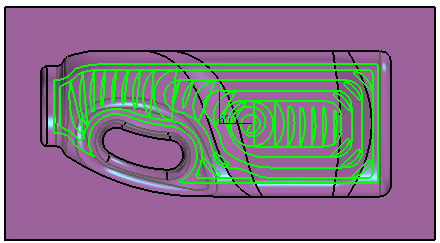 ZW3D QuickMill provides three kinds of essential roughing methods, and so satisfies all the requirements of rough processing.

For further information about ZW3D QuickMill, please visit www.zwsoft.com or send you email to ZW3D@zwsoft.com.