How to Mill with 2D Geometry in ZW3D

Milling with 2D geometry makes CNC programming simple and easy, and increases the flexibility of programming. This is especially true for parts with no surface features, and so the technique is widely used in the CNC (computer numerical control) machining industry for areas such as mechanical machining, mold base machining, and engraving.

Let’s take a look at how ZW3D CAM software can be used to machine the plate of a mold base using just 2D geometry. In figure 1 below, I have imported a 2D drawing of a mold base plate into ZW3D.

Follow along with me by going to the CAM level, and then I will show you how to use 2D drawings to create tool paths directly. 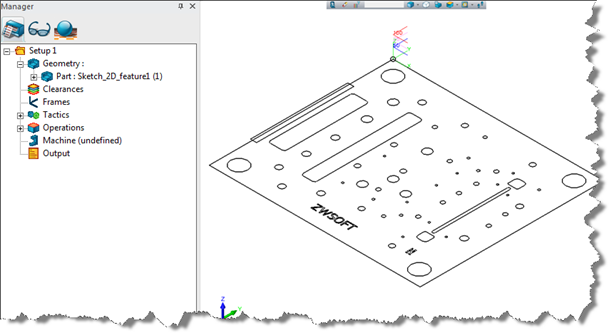 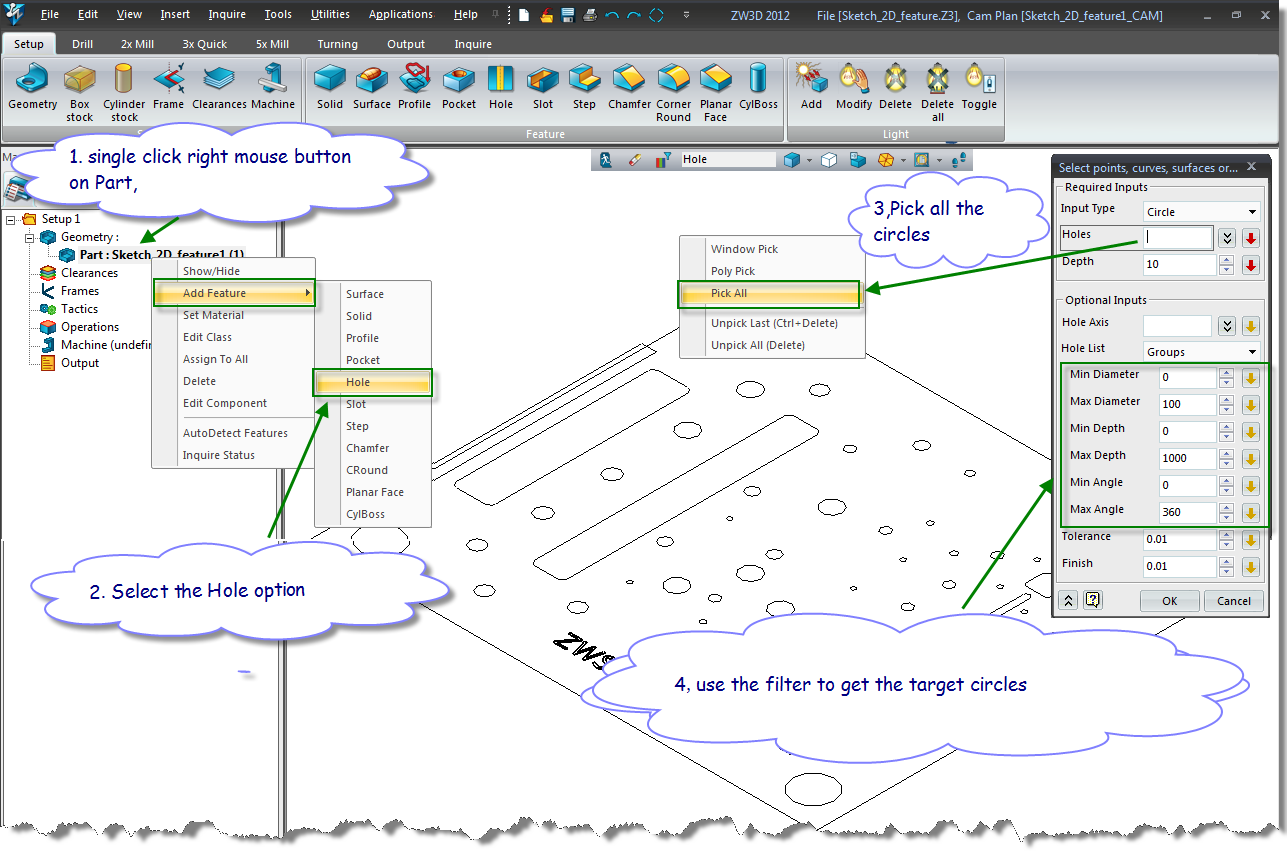 In the filter, I set up a diameter range to 0-50, and an angle range to 360-360.  After I click OK, the hole feature table pops up, as shown in figure 3. In this table, I assign the necessary attributes, such as the hole depth, counter bore diameter and depth, and the thread size. In this case, I assign a group of 12mm circles with the counter bore attribute, and then assign them all the  20mm  thread attribute. 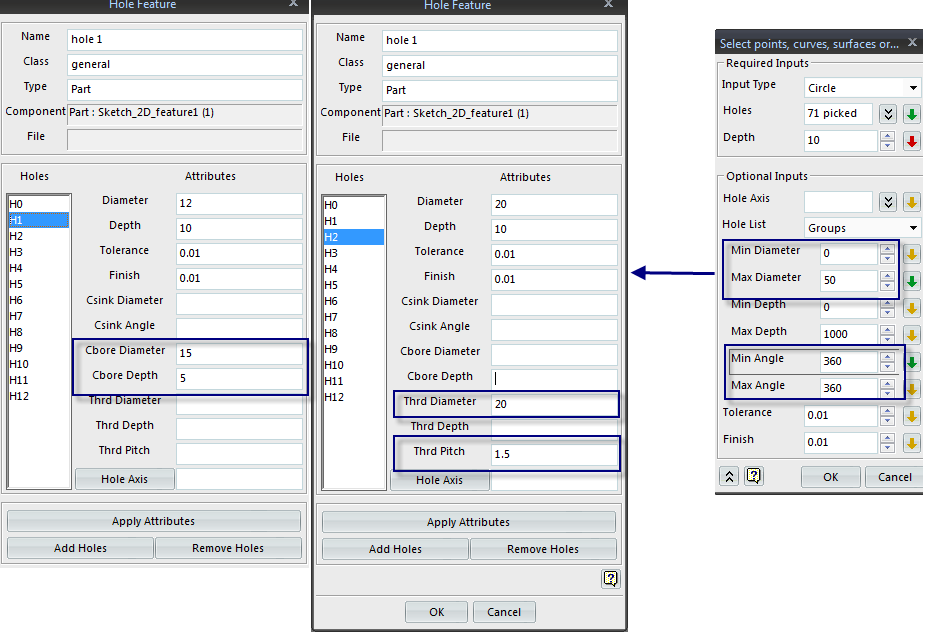 When I am done defining hole features, they ae displayed under the part, as shown in figure 4:

I single-click on Tactic (see figure 4), and a hole making tactic is created. Next, I add “hole 1” to the feature option of the Hole tactic. After ZW3D makes its calculations, the corresponding  toolpath is created, as illustrated below in figure 5: 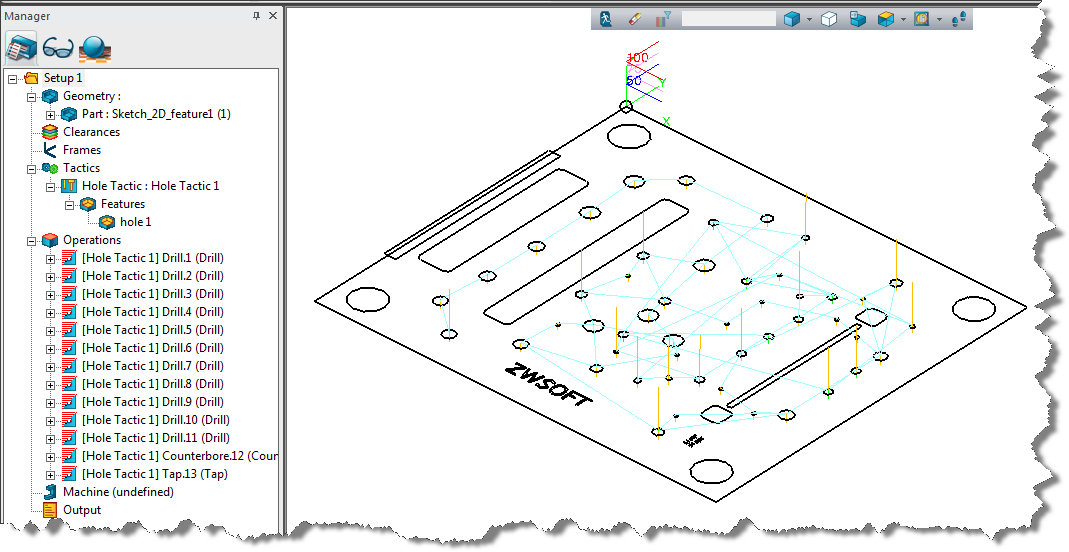 Besides the hole features, there are other features that need to be cut, such as the pockets, slots, and steps. Let me show you how I programmed the cutting of these features. I used the same process: first, I defined the features, and then I create the tool path.

Here is the exact sequence of  steps I used:

a) Cutting the Step Features

I define the step feature as shown in figure 6. 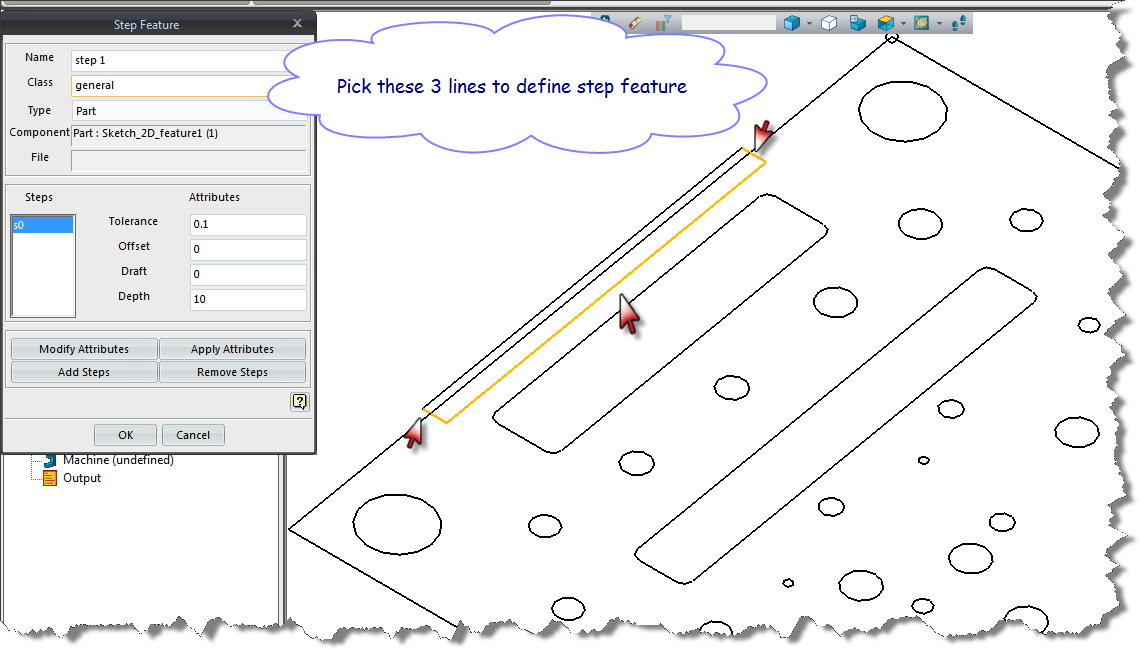 After the definition is set, I select Spiral Cut to create tool path. See figure 7. 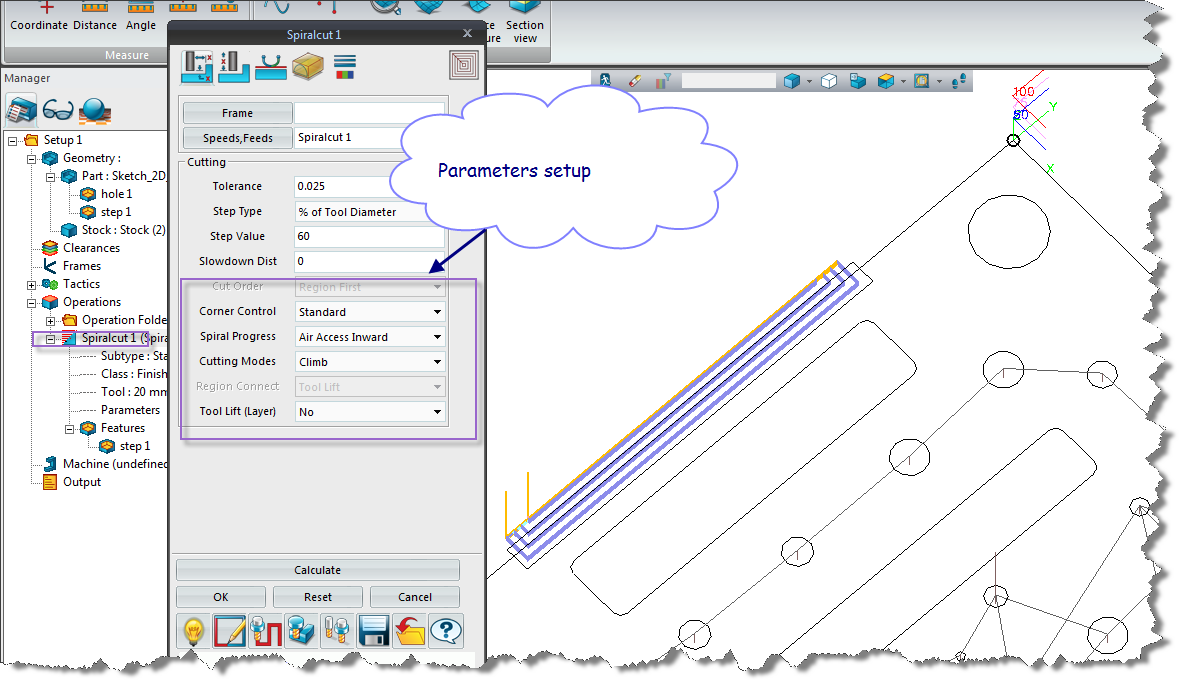 b. Cutting the Pocket Features

I define different pockets in the same feature table, as shown by figures 8 through 10. 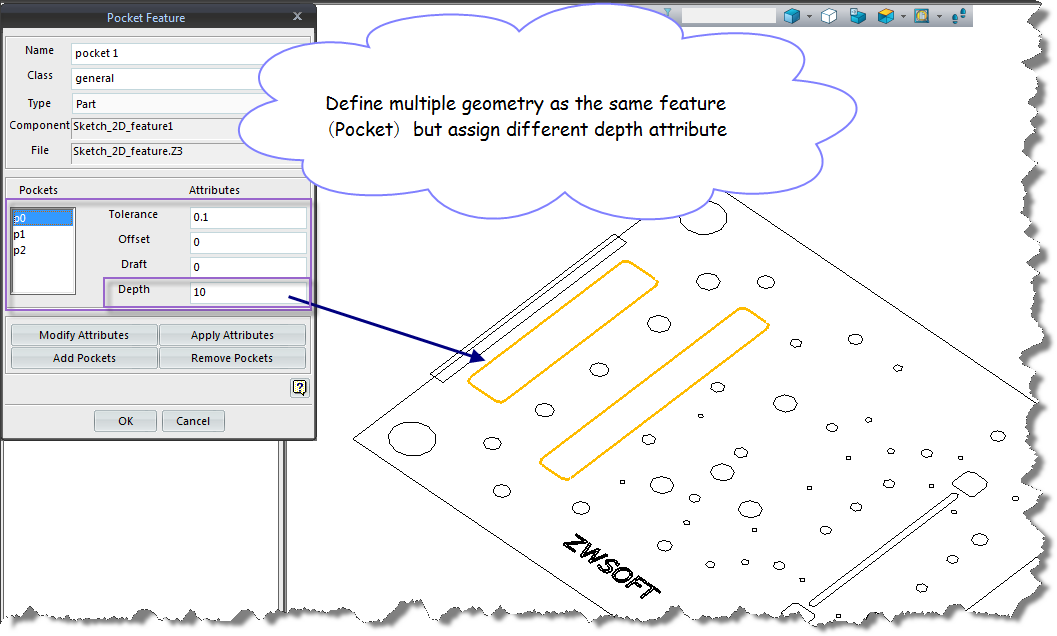 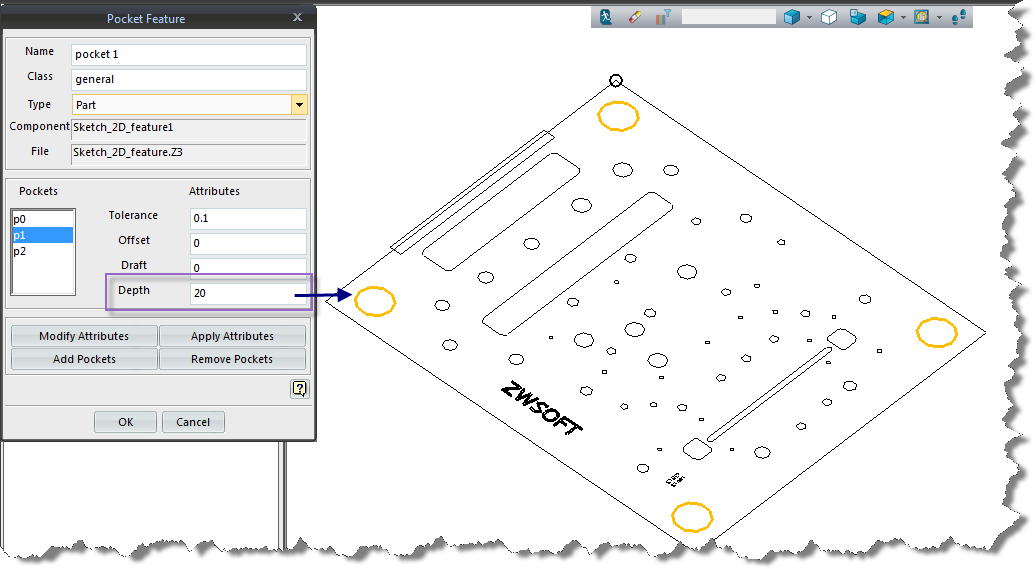 Figure 9: Defining round pocket features by using the same table 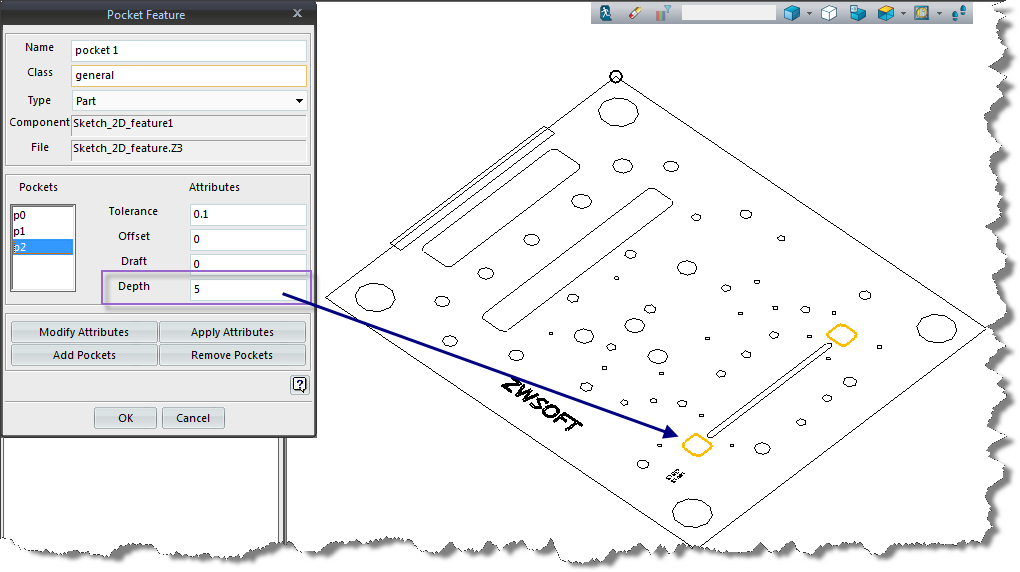 Once again, I select the Spiral Cut function create the tool path, as shown in the following figure:

The base has text in it, and so I use the Profile Operation to cut the letters. I define them as profile features, as shown by figure 12:

Figure 12: Defining the letters as a profile feature

Next, I select the profile operation, and then set up the parameters, as shown by figure 13:

As always, I follow this up by using the Spiral Cut function to create the corresponding toolpath. Finally, I get a toolpath like the one pictured below in figure 14: 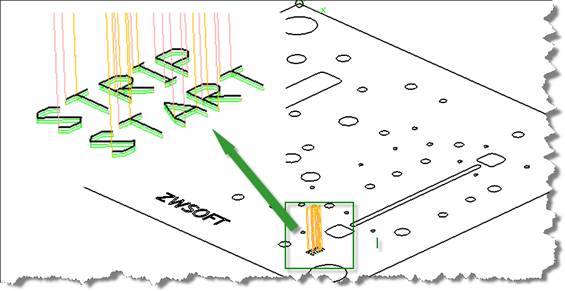 The ZWSOFT name is made from double lines. I definethe double-lined letters as profile features, as shown in the following figure: 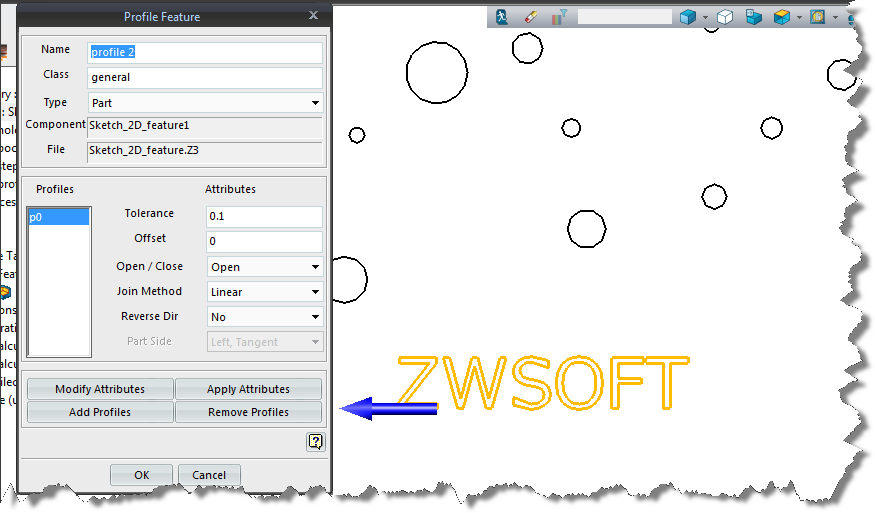 I chose the Spiral Cut function, and then define the parameters, as follows:

Finally, I have ZW3D calculate the tool path. It turns out like the picture shown below: 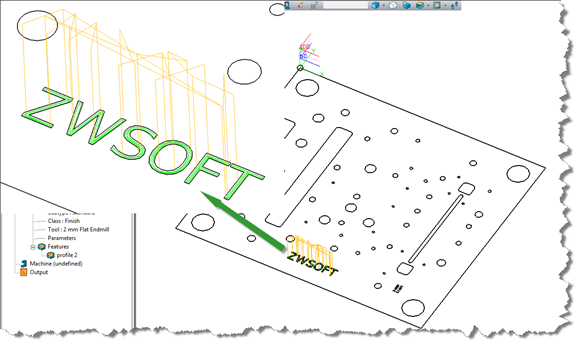 The following is the verification result: