Rest roughing and rest finishing strategies are frequently used in CNC programming. When the work piece is simple enough, then we can quickly define the working area from experience. It is, however, easy to over- or under-define regions to be machined, which leads to lower efficiency, creates gouges when regions are ignored. What’s more, it’s hard in many situations to find all the areas that need rest roughing and finishing.

Fortunately, ZW3D intelligently detects the rest machining regions left from a previous operation. This is accomplished with the Reference Operation function. It can be used withboththe 2- and 3-axis milling modules. The referenceoperation is one of the best helpers you will encounter for simplifying programming, reducing errors, and increasing efficiency in CNC operations.

Here I would like to show you several examples of how you can benefit from ZW3D’s reference operation.

In the part shown below, I use a 20mm-diameter flat cutter to area clear the left pocket using the Spiral-cut operation. (See figure 1.)

Obviously, the cutter is too big to remove all the material in this pocket, and so I need a smaller cutter with which to cut the rest material left over from the 20mm cutter’s operation.(See figure 2.)

I would like to generate toolpaths just for the blue material shown in figure 2, and so for my second attempt at the spiral-cut operation, I select a 6mm-diameter cutter. Following the calculation, I find that the cutter still cannot machine the entirety of the left pocket. (See figure 3.) 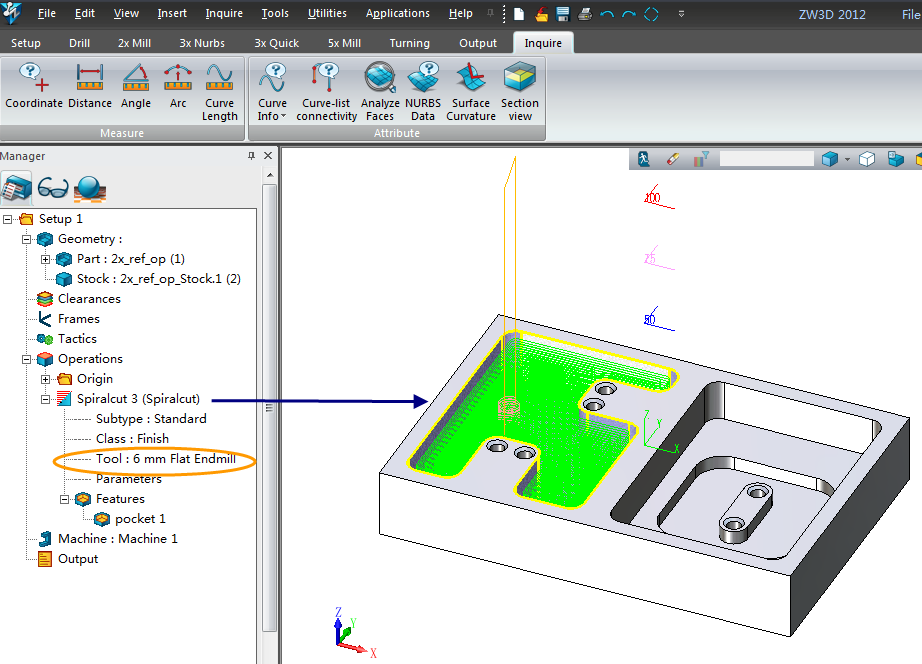 After two attempts, this is getting me frustrated. Which parameters should I define to get the most efficient toolpath? To solve this problem, I click the Subtype option until it changes to Rest Mill, as shown in figure 4.

This makes the Ref-Op option available for me to define. Now, I simply select the previous roughing operation, which detects the material left over from reference operation, and then generates the proper rest roughing toolpaths for it.(See figure 5.) 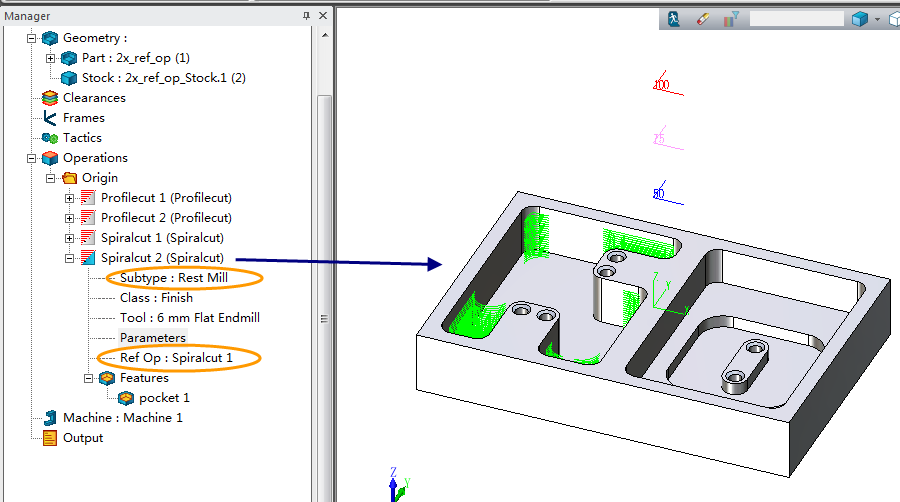 Using the same sample stock material, I want to create a profile cut operation for finishing the walls of the right pocket. I’d like to use a 20mm-diameter cutter. But there are four corners with radius of 5mm in this pocket. For these, I need a cutter whose diameteris less than 10mm to manufacture the four corners that the 20mm-diameter cutter can’t access. (See figure 6.)

For this, I use the same workflow as the rest roughing operation: Icreate a new Profile-Cut operation, but for this example I select an 8mm-diameter flat end mill cutter from the tool library.I change the subtype to Rest Mill by clicking on it, and then click the Ref Op button to select the operation I want to reference. In this case, it is the Profile-Cut1 operation. (See figure 7.) 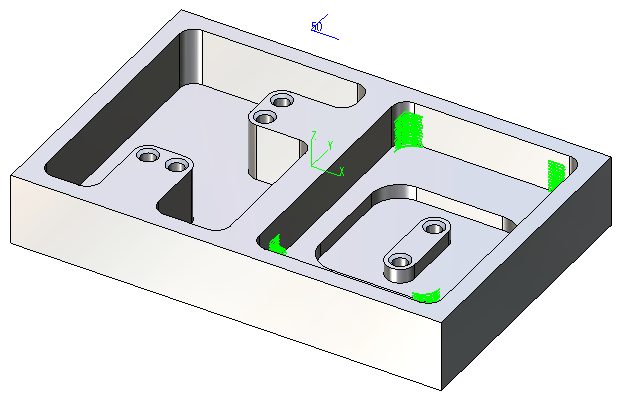 In the previousexamples, I explained the rest roughing and rest finishing operations fortwo axes, andnow I think that it will be easy to understand the reference operation function for three axes. Because ZW3D is based on unified principles, users will understand the convenient UI.

As this 3D part, normally, we want a cutter that is a little bigger to clear the material of the whole work piece. (See figure 9.) 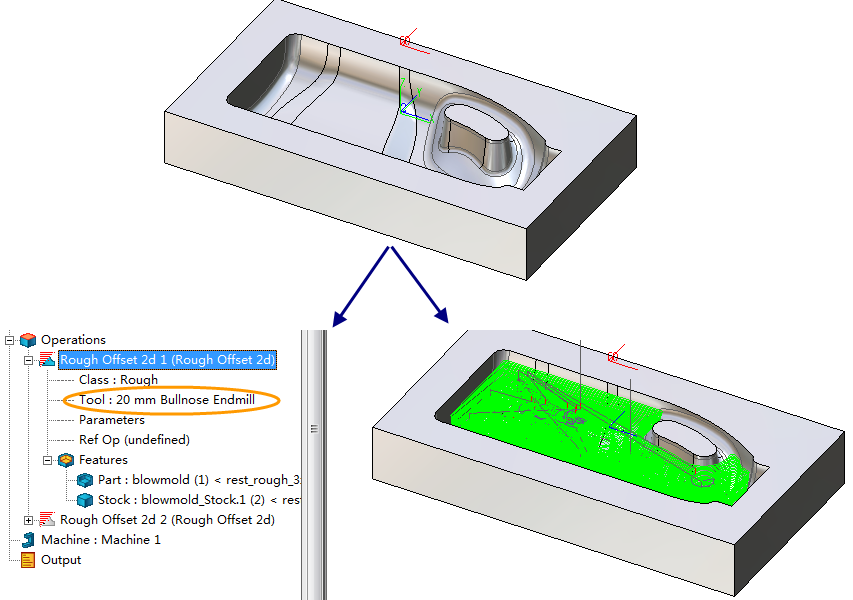 In 3-axis milling, it’s not easy to find all the rest material regions manually. Time-wise, it would cost you too much to define the regions, and then it is too easy to over-define or under-define areas.Fortunately, the reference operation function works intelligently in three axes to find all the areas atomically, and then generates the properties and toolpaths in a single operation.AllI need to do is to simply select the reference operation for the active roughing operation, shown as figure 10.

In summary, the reference operation function lets ZW3D easily find all rest roughing and rest finishing regions, and then generate the properties and toolpaths for them. The benefit of this operation is that it reduces the errors made by human definitions; in addition, it simplifies the programming and enhances the efficiency.

The referenceoperation function lets ZW3D easily find all rest roughing and rest finishing regions, and then generate the properties and toolpaths for them. The benefit of this operation is that it reduces the errors made by human definitions; in addition, it simplifies the programming and enhances the efficiency.