Viewing operations like zoom, pan, and redraw operate more smoothly, and you’ll work faster and more efficiently because our Memory Optimization improves the efficiency of commonly-used commands, resulting in greater speed and stability, especially when working with large drawings. 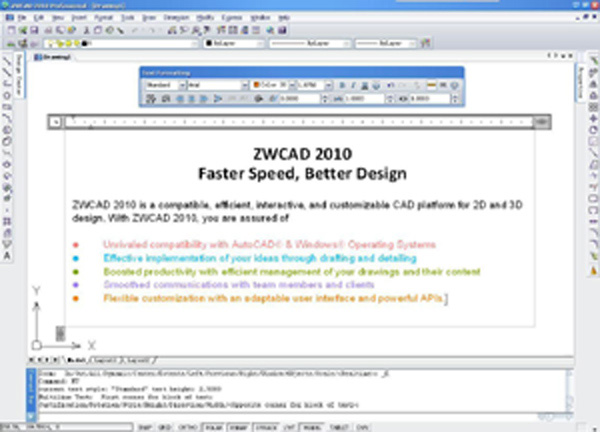 Splinedit for changing the shape of Spline objects. You can edit fit data, adjust refinements, change directions and move vertices, which enables you to work more accurately with Spline.

With the release of ZWCAD 2010, we are having our second annual design contest to showcase and reward the imaginations and talents of CAD users everywhere!We want you to show us what the future has in store by joining us in submitting a design for something we might see in 2015.A widget, a gadget, a new medical device, a spacecraft, maybe, or a magnificent new performing arts center; you decide, you design.

Whatever field it is in – architecture, engineering, construction or manufacturing – all that matters is that you create the design with ZWCAD, and you’re in the competition for the top prize, and there are over $15,000 USD in prizes! You can learn all the contest details and join at http://www.zwcad.org/DC2010/, and you can download ZWCAD 2010 from: http://www.zwcad.org/ .

Most of all, we want to give special thanks to all the users who participated in our Beta testing and provided their feedback to improve and enhance ZWCAD 2010 into a faster CAD solution!