On May 21, 2015, Thai-German Institute(TGI) paid a visit to ZWSOFT during their technical tour to HongKong, ShenZhen & Guangzhou, in a bid to learn latest 3D CAD/CAM technologies.

TGI is a joint-venture of Thailand and Germany, founded to promote technology transfer amongst Thai companies via professional training and further education. Back in 2012, they adopted ZW3D as their manufacturing training tool. 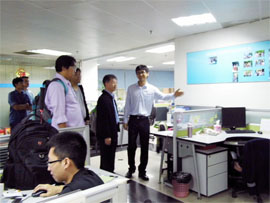 After a quick tour around the Guangzhou office, a group of 17 people from TGI gathered to witness ZW3D’s latest developments. “We are truly impressed that ZW3D does a good job in shortening our people’s learning curve and saving time from routine manual tasks,” said Mr. Somwang Boonrakcharoen, Deputy Executive Director of the TGI.

The Thai-German Institute is a joint initiative of the Government of the Kingdom of Thailand and the Government of the Federal Republic of German, the aim was to be an effective training center for transferring advanced manufacturing technology to Thai industry. It was set up as an autonomous body outside the formal education system with its operation under the supervision of the Foundation for Industrial Development and a broad oversight by the Ministry of Industry.

After the Thai Cabinet approved the establishment of TGI in September 1992, Thai-German Institute started its official operation in 1995 until 1998 when the first training course began, from this point on until now TGI has maintained a continual growth.

2022-12-28 Meet ZWSOFT at the Global Industrie 2023: The Biggest Industrial Exhibition in France