ZWCAD (TM) 2010，the latest CAD software solution developed by ZWSOFT, was awarded the DOBER NAKUP prize by SwPower Magazine, the leading computer publication of Slovenia. The magazine’s editors recently published a two-page long review of the ZWCAD 2010 in their “Software Power” magazine. 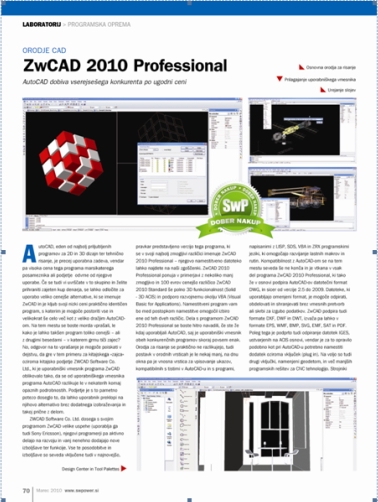 SwPower Magazine (see here)is the best-selling computer magazine in Slovenia. Its editors award the DBER NAKUP ("good value") prize to the software program that scores the highest in the cost-effectiveness rating. The current version, ZWCAD 2010, is greatly improved over previous releases, yet its price remains the same, something that is particularly welcomed by ZWCAD’s end users.

To know more about ZWCAD, you can view the video through
http://www.youtube.com/watch?v=c8QT3KPvSYo.

To celebrate the release of ZWCAD 2010, ZWSOFT is now holding its second annual design contest to showcase and reward the talents of CAD users throughout the world. For more information, please visit www.zwcad.org/dc2010.