Guangzhou, China: Dec. 4, 2009 - ZWCAD Software Co., Ltd., the leading supplier of CAD platforms, announces the availability of ZWCADTM2010 Beta software for public evaluation. Designed to seamlessly integrate with Windows 7 and communicate with other Windows applications, and now available in 14 languages*, ZWCAD 2010 Beta is ready to take ZWCAD users into the next decade.

In ZWCAD 2010 Beta, there are several major advances in CAD optimization. You’ll work faster and more efficiently because the Memory Optimization with compressed processing and new optimized arithmetic improves the efficiency of commonly-used commands and reduces CPU usage and memory, resulting in greater speed and stability, especially when of dealing with large drawings.

ZWCAD 2010’s newly-developed In-Place MTEXT Editor will help you focus on your design and make your work experience more efficient with new and improved functions for your convenience such as:

• Text Formatting Toolbar to adjust settings to the text style for a multiline text object and set the character and paragraph format of the selected text.
• Paragraph Dialog Box to set the formats of the paragraph (including tab stops, indents, paragraph alignment, paragraph spacing and line spacing).
• Display Options Menu to modify the way of the Text Formatting toolbar and provide additional editing options. 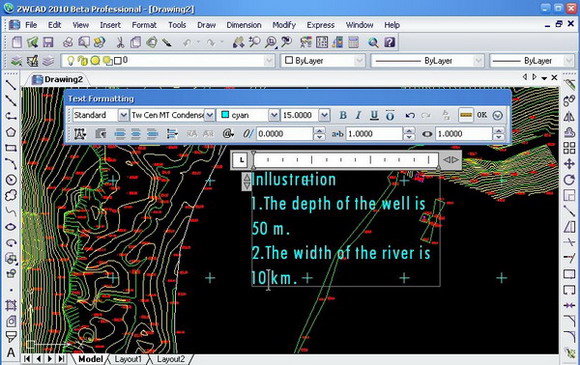 Meanwhile, ZWCAD 2010 Beta has made a lot of improvements in other features, such as Hidden Plot, Render, Refedit, Splinedit, Undo and Hatch. With these improved operations, you can work more smoothly.

Also in ZWCAD 2010 Beta, APIs like Lisp and VBA have been greatly enhanced, with 13 new functions added to the Lisp Vlax and Vlr series. ZWSOFT has added new commands to VBA as well, such as AppendOuterLoop and AppendInnerLoop to increase your proficiency. Another highlight of ZWCAD 2010 Beta APIs is the introduction of ZWSOFT's own runtime extension, ZRX. As the most powerful API (application programming interface) in ZWCAD, ZRX enables developers to migrate their former ARX applications to ZWCAD quickly.

“Even with all the improvements we’ve made, we know we can be better! We want to hear from our customers in order to know what they really need,” said Joh Li, director of ZWSOFT R&D Department. “We encourage our customers to download and test the new ZWCAD 2010 Beta release so that we can bring about an official version with better quality in January, 2010.”